The XLR is one of the most indispensable components used by hobbyists and pros alike when it comes to audio equipment.

It is fairly reasonable for most to invest their time and resources in other electronics and peripherals.

However, it is still worthy of being knowledgeable of the importance of cables in producing desirable results in the audio output.

If you are getting started, you may ask about what is an XLR microphone cable is and its importance.

Let’s explore the crucial aspects of this piece of equipment and other related topics.

Before we look into the particulars of this type of microphone cable, let’s first learn about why it is called an XLR.

Today, the letter XLR stands for External Line Return and has been available for more than half a century.

However, when it was conceptualized, these letters were defined differently.

The XLR connector was pioneered by James H. Cannon, the founder of Cannon Electric.

With its origins, it’s common for some elders to call it a cannon plug or a cannon connector, although these names became obsolete later on.

It was initially marketed as the Cannon X Series, but the succeeding version is called the Cannon XL.

The L came from the latch that binds the wires together in place, which many competitors adapted the same design.

Cannon further improved their cable by modifying the female socket.

The company embedded it with a synthetic rubber polychloroprene to further improve quality and durability.

This version is called the XLR, which stands for Cannon X Series cable with latch and rubber.

A revision of the XLR is made by a company called Neutrik.

Their XLR cable did not use a small screw, a standard component in the pin assembly of Cannon XLRs.

It is considered a design flaw because these screws are prone to falling out, making the pins twisted after some time.

When this happens, it usually leads to faulty operation.

The Neutrik XLR design became a standard in XLR connectors, as it is more reliable than the original Cannon design.

Today, the XLR cable is one of the most prevalent audio and video equipment connectors, from home studios to professional settings.

The three-pin XLR cable is still the most popular option, but there are wiring schemes with up to seven-pin designs.

Mini XLR cable is also available, which is made to accommodate smaller microphones.

At a glance, nothing jumps out when it comes to standard three-pin XLR microphone cable components.

The internal wires or conductors allow the microphone to carry the signal.

Cable shielding protects these wires, which helps ensure that the signal’s integrity is uncompromised during transmission.

Lastly, the three-pin connectors deliver the signal from the microphone to a specific audio interface.

These pins have different roles, which we’re going to identify.

The Advantages of XLR Microphone Cable

XLR cables are not the only choice when it comes to microphone connectivity.

However, there are significant benefits of using this type of cable that others couldn’t deliver.

Now that we have an educated idea of what is an XLR microphone cable is, let’s have a look at its features.

Here are some notable advantages that might convince you to choose an XLR microphone cable over USB and TRS cables.

XLR cable is a type of balanced cable, which enables you to carry a balanced signal or audio.

You won’t get balanced audio if your device can’t produce a balanced signal.

It would be advisable to check the specifications of your device output to ensure that it can produce balanced audio.

Since balanced cables are less impervious to signal loss, a louder signal gets transmitted with more capacity.

Thanks to this attribute, your input device doesn’t need much adjustment to get the preferred volume.

As such, you’ll preserve the dynamic quality of the audio source.

Overall, a balanced connection to the receiving device cancels noise or distortions, resulting in a clear and accurate audio output.

The locking mechanism of XLR microphone cables is one of the distinct features that separate it from other options.

This particular attribute dramatically minimizes unintended pull-outs, which is a common occurrence whenever you trip on a cable.

If multiple wires and equipment clutter your working space, chances are you or other people may accidentally trip on wires.

Having a locking mechanism protects your system from potential damage while ensuring that your connection is as secure as it gets.

Other cables such as TRS cable connectors and USB cables don’t have such features, making them highly susceptible to accidental pull-outs.

If you’re having issues managing a significantly long wire, the XLR microphone cable has an excellent feature to assist you.

You can connect a series of short XLR cables to have a single-piece cable whenever needed.

By plugging the male XLR end to another cable’s female XLR connector, you’ll have one long, functioning cable.

This feature is essentially impossible for other options such as TRS cable because both cable ends are male connectors.

If you’re recording vocals in a studio, most likely, you’re using a condenser microphone.

This type of equipment is known to capture high-quality, accurate, and detailed vocal input.

XLR cables are the optimal choice for connecting condenser mics into an audio interface to deliver phantom power.

In case you’re not familiar, let’s explore the details about phantom power.

The term phantom power is believed to come from the concept of an “invisible” power supply.

Specifically, it is the process of sending Direct Current or DC voltage to mics that need electric power to operate active circuitry.

Condenser microphones of the past require an additional power supply to run.

The power supply used back then was usually large and heavy and installed near the microphone.

Thanks to the efforts of German manufacturers Schoeps and Neumann, they were able to incorporate mixing boards into the condenser mic.

By adding this component, it effectively eliminates the need for a bulky external power supply.

Up to this day, the mixing board is a standard component in condenser microphones.

As mentioned earlier, phantom power is a DC voltage that passes through the audio wires.

The phantom power uses the same cable which the microphone’s audio signal travels to the mic input to supply the voltage.

Phantom power has a voltage range of 12 to 48 volts and a current range of 4 to 22 milliamps.

A balanced cable such as the XLR microphone cable makes this process possible.

The pin-two and pin-three of the XLR connector act as the signal conductors, while the pin functions as the ground conductor.

A lot of audio interfaces and mixers in the market today are capable of providing phantom power.

If your equipment doesn’t have phantom power, you might want to consider a microphone pre-amp.

Not only does this component generate phantom power, but it is also likely to have higher-quality inputs than other standard audio interfaces.

After we have enumerated the benefits of XLR cables, it would be hard to argue that it is the best option for microphones.

However, other cables are available for your consideration.

Let’s take a look at other notable microphone cables.

The TRS stands for Tip, Ring, and Sleeve, which are components used on the jack plugs.

Similar to XLR cable, TRS is capable of carrying balanced audio in microphones.

This cable type is available in multiple sizes, but the most prevalent variation is the 1/4-inch connector.

TS and TRRS connectors are related to this type of cable.

While the XLR cable is superior to the TRS cable in terms of overall features, the latter is more versatile.

There was a time that USB connection was pretty exclusive to PC peripherals, but nowadays, it’s one of the most prevalent means of connectivity.

When it comes to design features, a USB microphone cable is similar to the standard USB cables we see on our PC, with one exception.

You’ll see a standard USB connector on one end, but on the other end, most likely, it is a female XLR connector.

USB microphone cables are an indispensable component for streamers and podcast hosts because they usually use USB mics.

To identify the functionality of USB mic cables, let’s look at the design and features of a USB microphone.

A USB microphone has the same components as a standard microphone, such as a capsule and diaphragm.

Integrating two extra circuits, a built-in pre-amp, and an analog-to-digital converter sets it apart from other microphones.

The pre-amp eliminates the need for a mixer or additional mic pre-amp common in condenser mics and other types.

The A/D converter converts the mic’s analog output to digital data, allowing it to be recognized immediately by the computer.

As a result, you can easily edit or enhance your audio file because it is already available on your PC the moment you stop recording.

Because of convenience, USB microphones are the preferred choice for podcasts, dubbing, or streaming.

However, if recording high-quality songs, you’re better off using an XLR microphone.

The Most Notable XLR Microphone Cables

There are plenty of XLR mic cables available that gained notoriety for their quality and features.

Let’s check out a few of them. 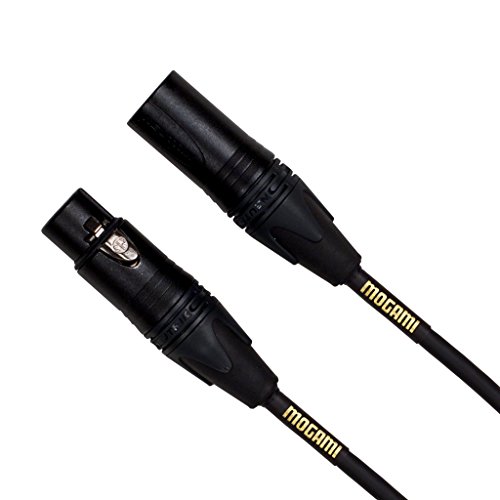 Mogami cables are quite popular with many enthusiasts and pros alike due to their series of high-quality products.

Some of the attributes you could enjoy are superb audio clarity, low noise, minimal loss of signal transfer, and overall durability.

The Mogami Gold Studio XLR Microphone Cable is available in multiple sizes, from two to 100 Feet.

These size options enable you to have the best length that fits your audio setup. 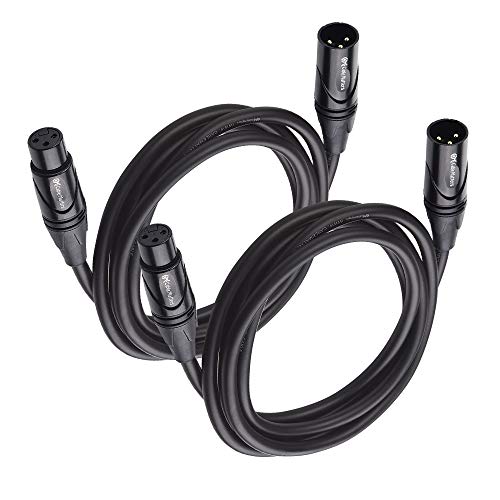 The Cable Matters XLR mic cable is a balanced microphone wire made with a soft PVC jacket.

This jacket is designed to have oxygen-free copper conductors that are beneficial in having a clear sound.

To effectively cancel out noise, it exhibits copper-braided shielding.

High-frequency response is expected because of the polyethylene insulation.

Hassle-free plugging and unplugging is made possible by the metal connectors molded with grip treads and strain relief.

These materials are also extremely durable, which is one of the reasons why Cable Matters XLR Microphone Cables are well-received. 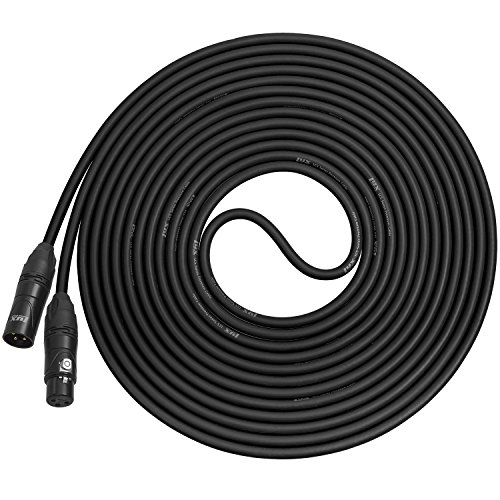 From 1.5 feet up to 200 feet, the LyxPro XLR cable is available for just about any cabling needs of amateurs and professionals.

Unlike other XLR cables, this is available in different colors: blue, red, green, white, yellow, and more.

It has an inner shield fortified by a twin conductive PVC, which reduces noise and other interruptions.

The LyxPro XLR cable has a 98% braided shield that works well for DMX lighting applications such as live performances and studio recording.

What Is an XLR Microphone Cable: Wrap Up

As mentioned earlier, the XLR microphone cable is usually overlooked by some.

That said, to achieve a hassle-free, seamless audio experience, you must carefully choose and maintain a suitable XLR mic cable.

Max Jacobson spent his early years perusing music stores with his dad whenever he needed new strings for his bass, or he just wanted to mess around on a drum kit on a Sunday afternoon. It started there, and by the age of 14, Max and his friends Ben and Aria had formed a trio. He spent time diligently learning drums, guitar, bass, and a bit of piano when the mood struck him, which led into his love of recording and setting up home studios. Today, he educates the masses on all the technical know-how you need to start an in-home studio while exploring the best music and recording brands on the market.

Create, Record, And Release Your Music

Download our FREE pdf guide and learn how to create a music from the comfort of your home.